The Walton, Walmart family, will do anything to grow profits and increase the greatest family fortune in the world: destroy public education, fund private, for profit prisons, break unions, pay poverty wages, encouraging their employees to collect welfare from the states and federal government, cheat its employees for time worked, etc.
The Waltons invest in what benefits the Waltons! Look deep and you will ALWAYS find the rotting garbage behind the manipulated, lying propaganda.

I used to shop at Walmart.

In September 2012, I couldn’t bring myself to do so anymore.

Several months prior, in April 2012, I began investigating the American Legislative Exchange Council (ALEC) right around the time that watchdog group Common Cause filed its original whistle blower complaint against “nonprofit” ALEC for its lobbying of legislatures nationwide to promote its corporate-interest-serving “model legislation.” Walmart was very involved in helping promote corporate-feeding ALEC legislation, including anti-union legislation, and education and prison privatization legislation. 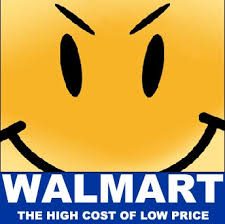 I began to learn what Walmart owners, the Walton family, really value– and it isn’t their workers, or the workers of vendors with which Walmart conducted business.

I learned that Walmart did business with Arizona-owned and prison-labor-run Martori Farms– a company with a reputation for abusing its female prison workers. (Walmart was active in ALEC when ALEC promoted its Prison Industries Act in statehouses across the nation, a piece…

Posted by Lloyd Lofthouse on December 4, 2014 in Uncategorized

← Massachusetts: How Teachers Defeated a Terrible Proposal
Brainwashing Americans for Extremism, Power and Profit: part 1 of 3 →