Tag Archives: Opt Out of Tests

Guest Post by HannaH Portner who blogs at Project Rainbow

On Friday they told us that we were going to be having Common Core tests next week (SBAC or Smarter balanced tests in CA) .

There was a letter posted outside the office. It said that anyone could opt out of these tests with parent permission. It said that we as students have a voice. We have rights. That got me curious. I started asking questions. I asked members of my neighborhood their opinions. I asked family, friends, teachers, and searched the internet about these tests. I wanted to share what I learned. I wanted to have a voice, not just be a number from a test.

I heard stories of kids not wanting to go to school because they were so deflated, so stressed and confused. I read about how much time test prep takes. I talked with my friend Suzy who is a 7th grade English and history teacher about how useless some of this data mining seems. “ We have to do 3 [in class essays] every year. I have to grade all of these, put them in the gradebook, give feedback, then input them into a district website to collect data. One extra step for teachers is awful. Why do we do this? What is done with this data? The district has no answer. I calculated that every year, in addition to all other curriculum requirements, we have to score 450 essays per teacher.”

Schools are having precious learning time taken away to administer standardized tests. The Huffington Post states: “Teachers now devote 30 percent of their work time on testing-related tasks, including preparing students, proctoring, and reviewing the results of standardized tests, the National Education Association says.” Not only is time drained, but money is being used to buy computers to administer these tests.

In Suzy’s case, she has to prep students for this one test but won’t necessarily know where the data is going or how it will be used. Last year we took practice tests and some questions were so hard I clicked random answers. I even wrote a poem about how I felt like a robot. I never got my score back. I wonder what would have happened if I wrote “ WHAT IS THE POINT” for an essay question.

Since I don’t see my results, or the specific questions I got wrong, I don’t understand what I could do better or worse on. In addition, we haven’t been provided specific test information, or easy access to reasons why we are taking this test. For example my math teacher told me that our test will be a practice for a later SBAC test. We aren’t even taking the real thing. She told me that the teachers will grade them and it will be good finals prep. I would be taking a practice exam for the test I would take that is actually a test prep for finals? That is a lot of prep.

It’s relatively easy to administer a test then judge students based on their scores. I think part of the problem is that when people fail these tests, their self esteem drops, they think they aren’t good enough, and then they cry when they get home from school. On many occasions I have come from school frustrated and broken out into tears, and I am an honor student in a really privileged area. Imagine what it’s like for our neighbors who don’t have free tutoring and get Ds and think it is all their fault. A test score is such a small part of a person’s intelligence. When these test are being taken, the institutions are saying that the test is what measures how smart a person is, or how good a school is. That is a whole lot of unnecessary pressure.

In addition if these tests are being given to school with low performance ratings and the tests are really difficult, some of these schools may not have the resources to provide test prep or extra help to their students and because they are underfunded, the students, teachers, and schools suffer the consequences.

To an extent, I agree that tests are necessary. People are certified to become nurses and plumbers and teachers by taking a test. But to test on how well a school or student is doing with one test is ridiculous. If you wanted the whole picture then someone could collect my GPA which has my average test scores. You could look at my extra curricular activities, and then asses the school based on multiple variables. But that would probably take too long.

I agree that the new common core method of teaching is pretty rad. I like having explorations in math. It makes me question and have opinions. I like that. I do not like the immense data collection and loads of testing. There is a limit to all of this stress, confusion, and frustration, and that is what we as a community have to figure out and act upon so that education can be fun, and full of wonder like it should be.

Lloyd Lofthouse, the host of this blog, is a former U.S. Marine and Vietnam Veteran,
who taught in the public schools for thirty years (1975 – 2005). 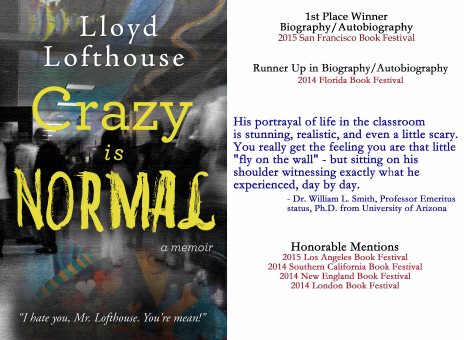