How to Recognize a Corporate Education Reformer in 5 Easy Steps

Without the use of evidence or facts, RheeFormers will promise miraculous results—the RheeForm term was coined to dishonor Michelle Rhee, the witch-queen of the corporate reform movement.

For instance, Michelle Rhee and Kaya Henderson boasted they would achieve 78 goals to improve the Washington D.C. public schools, but they only achieved 1.5 or 2.8% of the total of the first 54 goals assessed—that is a failure rate of 97.2% that the corporate media never reported on the cover of Time Magazine and/or the front page of every major newspaper in the United States.

– Did ANY of Michelle Rhee’s promises actually work in DC?—click the link and read the story.

What happened to these two Fraudsters? Kaya Henderson still has a job running DC’s public schools, and Michelle Rhee is a multi-millionaire whose every word is still breathlessly repeated as gospel truth by most of the corporate media.

RheeFormers will name their corporate charter schools and/or organizations with words that promise success, mom, apple pie and the flag. These titles help fool parents and children who think that whatever alchemy the RheeFormers use, it means their children will end up in college, never go into debt and land a great job leading to wealth and happiness for life.

For instance, a chain of New York Charter schools called “Success Academy” with Eva Moskowitz as their highly paid CEO, who is a serious a candidate for Michelle Rhee’s witch-queen crown.

“We were hoping for academic rigor. Instead we found a school that was overly strict, cold, and insensitive to the overall needs of the young children entrusted in their care. My son wet his pants for the first time since he was three years old because the school did not let him go to the bathroom when he asked. The school was incapable of recognizing that he had also developed anxiety around going down the hall to the bathroom.” – Business Insider

“I spent a lot of time on the phone with the author, Daniel Bergner. When he asked why I was critical of Moskowitz, I said that what she does to get high test scores is not a model for public education or even for other charters. The high scores of her students is due to intensive test prep and attrition. She gets her initial group of students by holding a lottery, which in itself is a selection process because the least functional families don’t apply. She enrolls small proportions of students with disabilities and English language learners as compared to the neighborhood public school. And as time goes by, many students leave.” – Alternet.org

RheeFormers will convince any gullible fool who will listen that it is the fault of the public schools and teachers’ unions that your child isn’t doing well in school and doesn’t read.  They will never mention that the real culprit is the child’s environment that has little or nothing to do with the public school or its teachers.  To a RheeFormer, everything is the public school teachers fault unless they are a TFA recruit.

The 1966 Coleman Report: Coleman himself later argued that the most important research findings of the study were twofold. First, it showed that variations in school quality (as indexed by the usual measures such as per pupil expenditure, size of school library, and so on) showed little association with levels of educational attainment, when students of comparable social backgrounds were compared across schools. (Differences in students’ family backgrounds, by comparison, showed a substantial association with achievement.) Second, a student’s educational attainment was not only related to his or her own family background, but also (less strongly) to the backgrounds of the other students in the school.

However, several studies have revealed that corporate Charters are about the same as the public schools they are replacing, and other studies and investigations across the country agree. When these studies look closer, they find that the corporate charters are attempting to stack the deck in their favor by getting rid of the most difficult children to teach—something public schools can’t do.

A piece in The Washington Post reveals, “The primary findings of the CREDO report show that charter school students’ test performance is basically the same as the performance of students enrolled in traditional public schools.”

Then why is the corporate education reform movement working so hard to demonize public school teachers, their unions and get rid of the democratic, transparent, non-profit public schools and replace them with opaque, for-profit corporate Charter schools run by mangers and CEOs?

“A new report released today reveals that fraudulent charter operators in 15 states are responsible for losing, misusing or wasting over $100 million in taxpayer money.”

– Tales of Fraud, Mismanagement, and Mis-Education

“There is so much news from place to place about the financial and management scandals in particular charter schools and charter management organizations that it is hard to keep track. Schools are taking public money—and too frequently finding a way to make a profit—while failing to serve the children they enroll or neglecting to enroll particular groups of children with special needs.”

– What Kind of Education Do “Reformers” Want for Their Kids?

In the case of Rhee, some find her choice to send one of her children to a private school hypocritical because, as Ravitch explains it in her blog post, Rhee “advocates that other people’s children should have large classes, inexperienced teachers, merit pay, evaluations based on test scores, and nonstop testing” and she’s sending her daughter to a school with “small classes, lovely facilities, a rich curriculum, and experienced teachers.”

– Where Arne Duncan Sends His Kids to School

Conclusion: Moyers & Company reports that the “reformers” say they want excellent education for all; they want great teachers; they want to “close the achievement gap”; they want innovation and effectiveness; they want the best of everything for everyone. They pursue these universally admired goals by privatizing education, lowering the qualifications for future teachers, replacing teachers with technology, increasing class sizes, endorsing for- profit organizations to manage schools, using carrots and sticks to motivate teachers and elevating standardized test scores as the ultimate measure of education quality. …

The “reform” movement is really a “corporate reform” movement, funded to a large degree by major foundations, Wall Street hedge fund managers, entrepreneurs and the US Department of Education. The movement is determined to cut costs and maximize competition among schools and among teachers. …

The reformers are Republicans and Democrats. They include not only far- right Republican governors but some Democratic governors as well. They include President Barack Obama and Secretary Arne Duncan, as well as Democratic mayors in such cities as Newark, Chicago and Los Angeles. Elected officials of both parties have signed on to an agenda that threatens the future of public education. …

The Top-10 Most Unwanted List—the Enemies of Public Education

This list reveals the most dangerous enemies of public education and how they earned their spot in infamy. To discover why they landed on this list, click the links included with each name below the brick wall. This list is subject to change at any time. 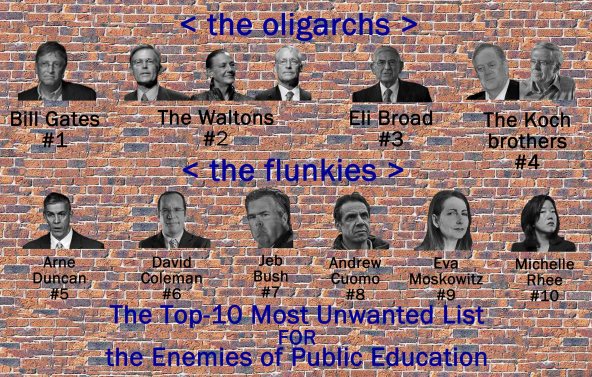 #3
Who is #EliBroad and why is he trying to destroy public education?
Defend Public Education.net

#6
Who is #DavidColeman
Architect of Common Core and War on Pub-Ed
who ignores professionalism of teachers
Diane Ravtich.com

#8
#AndrewCuomo is backstabbing governor,
who wants to kill traditional public education in New York State
Punishing Teachers: Cuomo in 2015 Was Jindal in 2012

#10
Did #MichelleRhee achieve most of her broken promises in D.C.
NO!
She failed with 98.5% of boasted goals
Did ANY of Michelle Rhee’s promises actually work in DC?

If you want to suggest someone who deserved to be added to the extended list—beyond the Top Ten—please leave a comment with a name and provide a link to evidence that shows why they deserve a spot on the extended list of public education’s worst enemies.

Bobbie Jindal
Bill Moyers & Company: Who are the Corporate Reformers of Public Education?